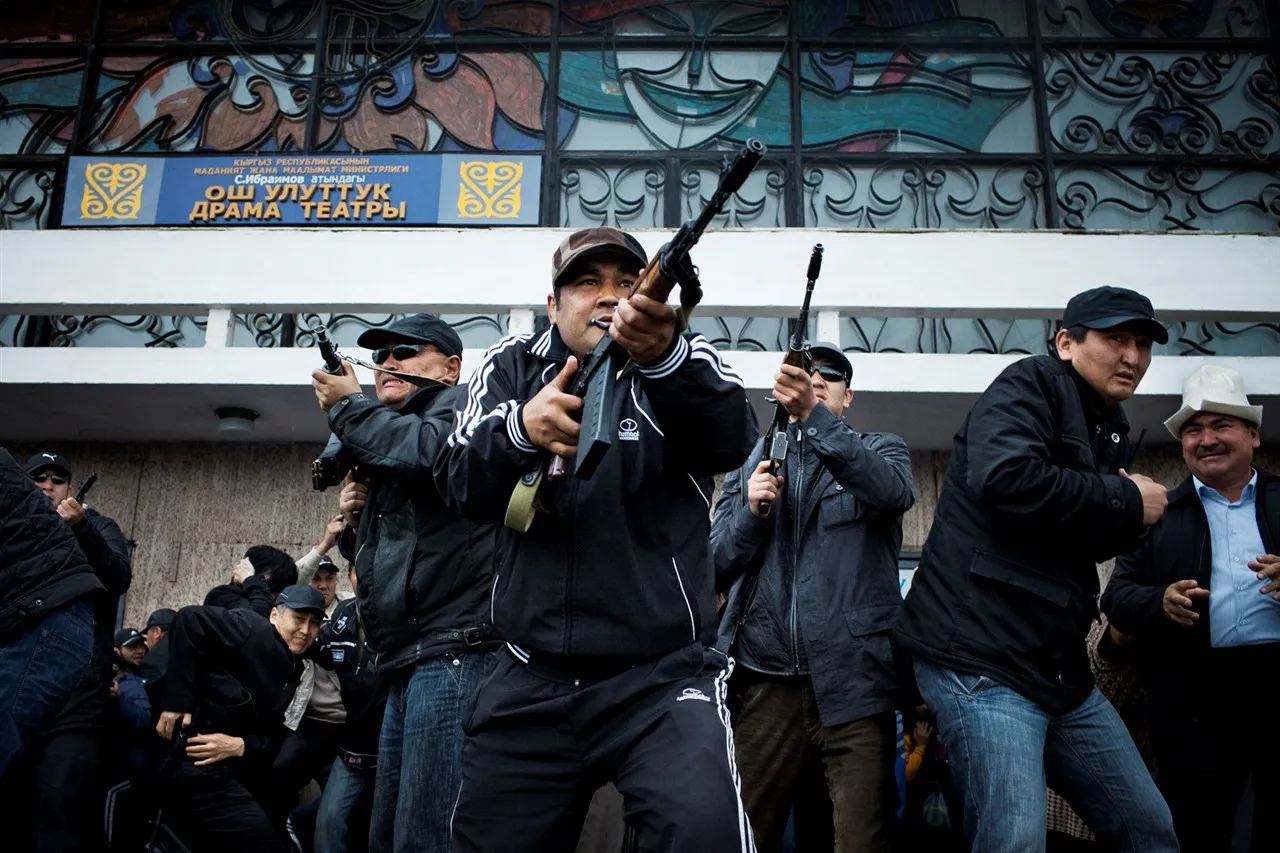 How the state became leader in the number of western NGOs

After the withdrawal of troops from Afghanistan, the United States, if not lost, then greatly weakened its military positions in the Central Asian region. Attempts to somehow maintain a presence by returning to the air bases of Karshi-Khanabad in Uzbekistan and Manas in Kyrgyzstan, from which they were expelled back in 2005 and 2009, respectively, did not lead to anything. The intractability of Tashkent and Bishkek in American political and expert circles is associated with pressure from Moscow and Beijing, the two most influential forces in Central Asia.

However, in modern conditions (Ukraine and the situation around Taiwan), when the main opponents of the United States are the People's Republic of China and the Russian Federation, the region bordering both countries takes on an additional importance that can hardly be overestimated.

And in the conditions of the impossibility of applying military and partly political and diplomatic pressure, such an instrument as “soft power” comes to the fore, with the help of which the United States and its allies will destabilize the situation in the countries of Central Asia. One of the main tools for the implementation of this tactic are non-governmental (NGO) and non-profit (NPO) organizations.

In the post-Soviet space, Kyrgyzstan is a kind of champion in terms of the number of NGOs and NPOs per capita. For 6.5 million inhabitants of the republic there are, according to various estimates, from 18 to almost 22 thousand officially registered organizations. However, according to the Asian Development Bank (ADB), About 600 NPOs/NGOs (hereinafter referred to as NGOs) are constantly working and monthly reporting to the State Tax Inspectorate of the Republic, of which about 400 operate in Bishkek.

In general, Kyrgyz NGOs fall into two broad categories. The first type is organizations of a political-institutional type that “advocate for reforms, for democratization, for openness, transparency in the work of state bodies,” etc. Basically, such organizations are represented in Bishkek and are very politicized. These organizations are involved in the examination processes at various levels, are the authors of various reports according to international conventions and documents.

The second type is organizations of, let's say, "practical action" that work at the local level, mainly rural and regional NGOs.  These NGOs do not set themselves direct objectives of institutional changes; the goals of these organizations are aimed at solving the socio-economic problems of a given community or a particular social group.

According to their areas of activity, Kyrgyz NGOs can be divided into five main categories:

- associations in defense of the rights of certain groups;

- associations according to interests;

- associations for the protection of the rights of national minorities;

According to the study "Corporate Social Responsibility in Kyrgyzstan on the example of the city of Bishkek", conducted by the Center for Public Opinion Research and Forecasting "El-Pikir", non-governmental organizations occupy a leading position in the ranking of socially responsible institutions in Kyrgyzstan.

According to the research of the Foundation Soros-Kyrgyzstan, the following areas of activity of NGOs have been identified in the republic: almost every second active NGO (43%) operating in the republic, one of the main areas of activity is social - the fight against poverty, social protection, assistance to socially vulnerable segments of the population. Almost half of all active NGOs (42%) are engaged in human rights activities. Other most popular areas of activity of NGOs in the republic are health protection (25%), civic education (22%), gender (17%) and ecology (15%). Every tenth public organization is engaged in supporting other NGOs/NCOs (11%).

The main sources of funding for Kyrgyz NGOs are Western, mainly American organizations. At the same time, it should be noted that both sponsors and recipients of foreign funding act quite openly, which is permitted by applicable law. An attempt by the authorities of the republic to adopt a law on foreign agents, similar to the Russian one, was failed, which indicates the degree of influence of NGOs on power structures, including the legislature.

It is enough to go to the official website of the US Central Intelligence Agency, where there is a section "The World Book of Facts", which describes the general situation in the countries of the world in all areas. There is a very interesting page in this section called "Political pressure groups and their leaders". In Kyrgyzstan, according to the CIA, these are the following NGOs and their leaders: Public Foundation "Legal Clinic "Adilet" - Cholpon Dzhakupova; "Bir Duino" - Tolekan Ismailova; "Coalition for Democracy and Civil Society" - previously Dinara Oshurakhunova was listed on the CIA website, now she has been replaced by the current head of the coalition, Azamat Adilov; human rights center "Kylym Shamy" - Aziza Abdirasulova; legal partner group "Precedent" - Nurbek Toktakunov; public association "Institute of Public Analysis" - Rita Karasartova. Some experts tend to believe that with this list, Washington openly exposes its agents of influence or pressure agents (these types of agents have somewhat different functions). The very concept of “pressure group” means an association of people or organizations which aims to change legislation or policy, to influence the authorities.

786 million 332 thousand soms - only ten local NGOs have received that much grant money in recent years, including those six that the CIA recognizes as political pressure groups in Kyrgyzstan. Leadership in terms of funding belongs to the Public Organization "Coalition for Democracy and Civil Society".

Here are some examples of the activities of foreign sponsors.

Before the 2020 parliamentary elections, organizations associated in various forms with US government structures, including the State Department, have become very active. The United States Agency for International Development (USAID) announced its intention to allocate $2.5 million (according to Kyrgyz terms, a very significant amount) to support the elections, which, under the guise of grants, should eventually go to organizations monitoring the elections, including for monitoring of mass media and social networks. In reality, the goal was to try to push pro-Western factions into parliament.

In 2021, USAID has already “helped” with the presidential elections. At the same time, other organizations also take part in Kyrgyz politics. Among them: International Foundation for Electoral Systems, National Democratic Institute for International Affairs (NDI), which is created and funded by the National Endowment for Democracy (NED), International Republican Institute (IRI). It is noteworthy that both of these Institutes (NDI and IRI), although officially considered “independent”, have a pronounced party coloring and are closely connected with the US Congress and administration. According to some reports, both of these structures have partially budgetary funding.

In this list, it is also worth noting the "Eastern European Democratic Center", «Counterpart Consortium», «Peace Corps», «Eurasia Foundation», Institute for War and Peace Reporting.

With the help of these and similar structures, financing is provided for Kyrgyz organizations whose activities are aimed at promoting Western and mainly American interests in Kyrgyzstan.

At the same time, if necessary, such structures can be set up in the field quickly and in a short time. For example, before the 2020 parliamentary elections, USAID allocated more than $1 million to the «Common Cause» organization, which at that time was unknown to anyone and was created just a month before receiving funding. ОThe organization still exists today, and the US Embassy in Bishkek and the National Democratic Institute are also named among its donors and partners.

The work is carried out in educational projects. United States-funded «Prague Center for Civil Society» Conducts Investigative Journalism Training Programs in Central Asia. Among the speakers there were representatives of the Center for the Study of Corruption and Organized Crime (OCCRP). As part of the program, an investigation was conducted into the activities of the former Deputy Chairman of the State Customs Service of the Kyrgyz Republic Raiymbek Matraimov, whose figure was already used in the 2021 presidential elections.

Let's add to the list the American University of Central Asia (AUCA), whose director in early 2020 was Andrew Kuchins, who previously led the Russia and Eurasia program at the Center for Strategic and International Studies (CSIS), an organization associated with the American authorities and intelligence agencies. Moreover, the organization was involved in the development of cybersecurity policy during the Obama presidency and to participate in shaping US foreign policy. Kuchins has also served as director of the Russian-Eurasian Program at the Carnegie Endowment for International Peace.

AUCA students and alumni took an active part in the 2020 parliamentary election race, supporting the pro-American parties «Reform», «Chon» «Kazat», «Bir Bol», whose supporters participated in mass protests in Kyrgyzstan immediately after the polling stations closed. Recall that then everything ended with the release of Almazbek Atambayev from prison, but Sadyr Japarova and his team managed to intercept the initiative.

The effectiveness of the actions of Kyrgyz NGOs and their foreign sponsors is evident. At the beginning of this material, we mentioned that the republic is a kind of champion per capita. At the same time, we should not forget the fact that it is also the champion in the number of “color revolutions” in the post-Soviet space.

It seems that this trend, at least in the near future will continue. In this regard, I would like to note such moments that create favorable conditions for the subversive work of pro-Western NGOs, as a problem of the economy, which largely depends on the income of labor migrants, Islamization of the population, which not so long ago was typical mainly for the inhabitants of the southern part of the country, дdivision of the republic into "northerners" and "southerners", who are divided into clans, and are often at war with each other. And we must take into account the degree of influence of the local drug mafia, which, according to some Kyrgyz sources, has well-established connections in local political circles.